The tree was started from a cutting from a Greenwood Bonsai Studio workshop tree in 1995.  It was grown in a grow box for 5 years before being transferred to a bonsai pot in the spring of 2001.
2001 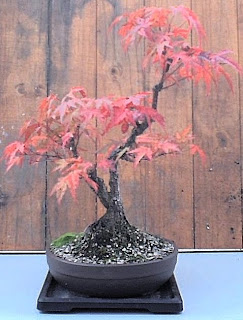 The tree adjusted to life in the bonsai pot without problems and thrived under a feeding regime that included Miracid.  The growth was somewhat course and internodes remained long.  That first major branch growing from the inside of a bend continues to be a thorn in my side, but I was hoping that it would help to thicken the trunk below this point, so I decided to keep it for the time being. 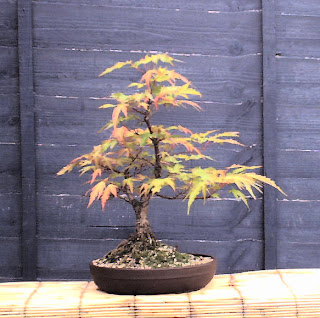 The tree was repotted into pure Akadama to help with root development and give sufficient moisture holding capacity for my erratic watering schedule.  As most beginners coming to bonsai, I read many books talking about leaf cutting, shoot pinching and other such techniques.  What most of these books fail to mention is that these techniques are really the final stages of development and  I probably did more harm then good applying these to this tree in this early stage of bonsai training. 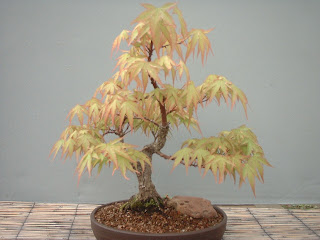 The tree suffered a major setback through a massive infestation of scale insect that which I failed to detect before major damage was done.  The tree was obviously suffering, with yellowing wilting leaves and poor growth.  I initially thought that there was a problem with the soil, roots or the fertilising regime. After investigation all of these were eliminated as the cause of the problem.  There was no visible sign of pests or fungal infection, and I was at a loss on what to do next.  It was my father in law who found the scale insect hidden underneath the branches.  These insects looked much like the corky spots of bark that had started to develop along most branches now and were virtually invisible, but on closer inspection, every branch and the whole trunk was covered with the pests.  I removed as many as I could by hand and used a systemic insecticide to clear the infestation for good.  The tree slowly recovered over the next few months under a soft fertilising scheme.  Needless to say, the tree (and all my other trees) now get two applications of a Winter Tree Wash to prevent a repeat.
2004 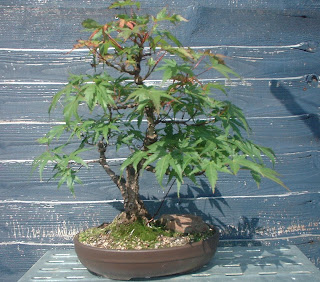 The tree has developed nicely and the corky bark had started to cover the smaller branches and most of the trunk now. That awkward first branch was now less of a problem as the trunk below it is starting to thicken, but I was not happy with the overall image of this tree.  The current front leaves the back of the tree fairly bare and makes it quite two dimensional.
2006 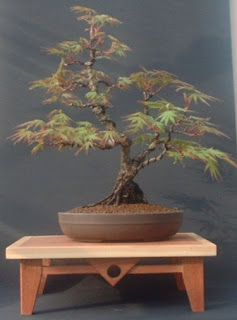 I have now changed the front view to make the most of the root to trunk transition which has filled out nicely over the last few years and using that third trunk to fill out the back of the tree has given the image good depth.  The drawback was that to achieve this I had to let the tree grow strongly and it has lost some of the finer ramification.  This will be brought back over the next few years through pruning and pinching and leaf cutting
Unfortunately the tree was blown off the display bench during the spring storms in 2009 and the apex broke off.  I am currently regrowing a new apex which will add another 10cm to the current height of the tree.
2010 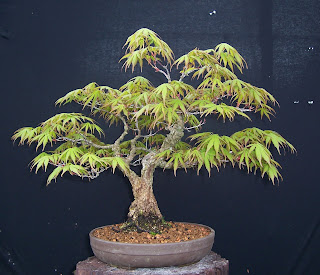