I bought this tree in the autumn of 2001 from Greenwood Bonsai Studio.  The tree was on offer on the pre-owned table and at £55 presented excellent value for money, even if it would have been raw stock.  This bonsai obviously had some previous training, but was unusual in shape for a juniper.  It more or less resembled a Broom style, with both of the lower primary branches forming part of the canopy.  There was no definition to the foliage mass and a many of the inner branches were covered in dead and weak growth due to lack of light and air.  I started styling the tree in spring of 2002, by thinning out a lot of the existing foliage so that I could see the structure of the tree and branches.
With that straight  trunk, no lower branches and most of the foliage in the upper half of the tree, it suggested  a literati, but I decided to try and lower the right hand primary branch and go for a slanting style.
2002 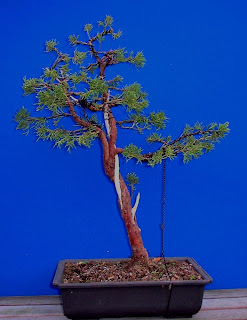 The branch was lowered with the aid of a guy wire which was gradually tightened over the next year.  The planting angle was changed at the next repotting and the tree was fed and watered copiously to encourage growth.  Foliage was pinched in order to keep growth tight and develop foliage pads. I shortened that long jin spiralling around the main trunk as it did nothing for the image and looked out of place. 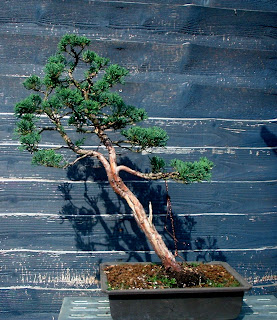 Later that year I removed the left fork of the trunk in order to bring more balance to the tree and lighten the canopy .  (BTW - I planted the severed branch as a cutting, which to my surprise produced roots the following spring and was used to produce a nice shohin Tanuki - more in a later report)
2003 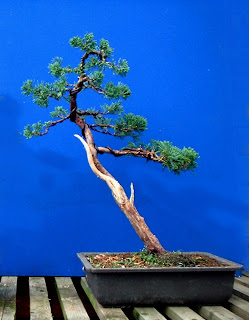 The tree was repotted in to a much shallower pot in 2004. It was growing strongly following the repot, but suffered a major attack of  Juniper scale in June which caused a lot of the foliage to turn brown and die off.
This was treated with a malathion based insecticide which eventually cleared the infestation.  With the tree under stress, I decided not to work on the tree for the remainder of the year, focusing instead on aiding recuperation with a light feeding regime.
2004 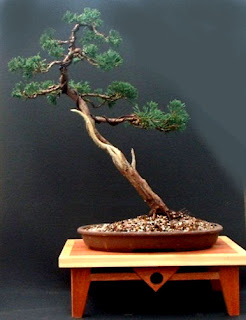 2005 saw the tree fully recovered and the heavy feeding was reinstated.  The tree responded with good growth and the foliage pads started to fill out, hinting at the future shape of the tree. Branches were wired to finalise branch placement and foliage was pinched to keep it tight.
2005 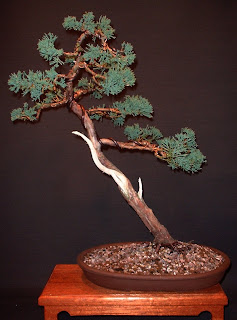 Below is the current picture of this tree.  As you can see the foliage is now rather heavy and in need of major thinning.
2010 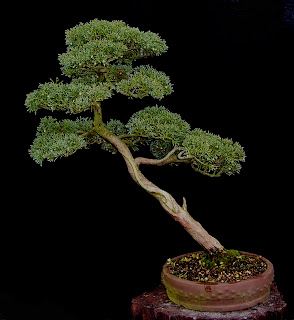 Future styling will concentrate of further lowering the first branch on the right to narrow the angle between the branch and the trunk.  The right hand branches higher up on the tree will need to be lowered to the same degree to keep the flow consistent.  All the foliage pads will need to be thinned and defined in order to lighten and balance the image.
Posted by Unknown at 20:29